What’s in a File Name? 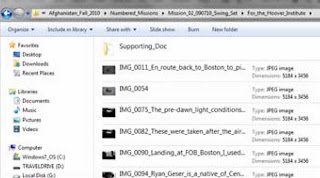 Digital creators could take a page from expectant parents who carefully weigh names for their baby. File names can convey a great deal of meaning, and they're often the only clue to the contents of a digital file. A few collections of photographs at the Hoover Institution Archives show both missed opportunities and powerful names.

Douglas Smith, an American historian, was in Moscow during the attempted coup of August 1991. He took some photographs, which are part of the Douglas Smith miscellaneous papers, but they all carry equipment-generated file names that provide no information. Here's an example:

We know the photos depict the attempted coup because he told us, but a viewer must be familiar with the place and events to recognize the content of each image. They remind me of the decades-old photos in a box in my mom's closet: we assume they depict various ancestors, but because they do not have captions, the people remain unnamed and unknown.

Giles Udy gave more thought to the file names for his photographs, which depict structures in the former gulag camps of Noril'sk in Russia. Some names are of the machine-generated variety, but he renamed others like this:

This file name functions like a caption describing the image. Udy also retained the original file name, DSCN7527, which was smart. It connects the PDF version of the image that he gave to Hoover back to the original image in its native format, which Udy chose to retain. Udy also arranged his photographs into digital folders so that all the images of the Alevrolitnaya penal camp are in one folder bearing the name of the camp.

John Bruning, who took thousands of photographs while embedded with a National Guard unit posted to Afghanistan in 2010, built on this descriptive naming by adding dates to many folder names in MMDDYY format like this:

In addition, Bruning wrote accounts of the events that he photographed. This Mission 02 folder contains a Word document that describes the mission, which was intended to "pick up some U.S. Army engineers and a swing set. We would then air assault them into a landing zone next to Manny's Bazaar so they could install the swing set at the local school." Bruning's story wraps his images in context and color.

But Bruning and Udy both failed in some technical aspects of file naming. First, they included many deprecated characters, such as spaces, parenthesis, and other punctuation marks. In addition, some lengthy folder and file names exceeded the directory path limitations of our system, causing the file names to be automatically truncated. For example, when copied, the file name

Unfinished building - piles in permafrost then bldg above 3558.JPG

All of these small problems take time to locate and correct. You might say that somewhat like expectant godparents, we're still awaiting our first born-digital collection to arrive with perfect file names.
Posted by Lisa Miller at 8:00 AM